In addition to providing the particulate allografts, injectable bone putty, and synthetic bone grafts you love – VTS also provides a variety of soft tissue grafts, including tendon allografts for orthopaedic use.

Devo, a 3.5 year-old Whippet, was referred to Dr. Brown for an injury to his right hind limb that was a result of being struck by his owner’s electric mobility scooter. Devo was placed on moderate exercise restriction immediately following the injury. A week later, Devo was still limping and there was a swelling over his right Achilles tendon. Devo was placed on an NSAID, given Acepromazine for sedation, and was placed on strict exercise restriction. When Devo’s limp was not improving with pharmaceuticals, it was time for an evaluation by an orthopaedic specialist.

On evaluation by Dr. Brown, Devo was found to have a severed Achilles and SDF tendon. Dr. Brown recommended repair using an allograft tendon from VTS. 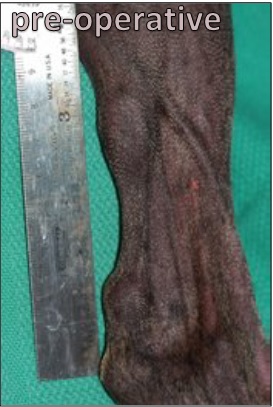 In this pre-operative photograph, initially taken for measurement purposes, swelling is seen at both the proximal and distal ends of the Achilles tendon. The swellings are the ends of the severed tendons that have been unapposed and unable to heal in the weeks since Devo’s injury.

The first step of the surgery was to fully debride the collagen and connective tissue that had formed around the injury site. When fully debrided, the severed ends of the damaged tissues are suitable for graft implantation.

VTS’ tendon allografts are shipped frozen, on dry ice, and have a six-month shelf life. Prior to the procedure, the graft is removed from the freezer and allowed to thaw to room temperature for implantation. For this procedure, Dr. Brown used a superficial digital flexor tendon, our most common selection for Achilles (common calcaneal) tendon repairs.

Once the site is fully cleaned, flushed, and debrided, the allograft can be sutured to the ends of the severed tendon. For this particular procedure, Dr. Brown made an incision in the allograft at one end of the tendon so that there was a “Y” shape on both ends. 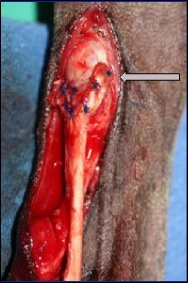 The proximal “Y” end of the tendon is sutured to the remnant of the injured tendon. The Y-shape allows for a stronger repair as there are more points of contact between the allograft and the existing tendon structure.

Once the proximal end of the tendon is in place, the distal end can be sutured. Dr. Brown pulled the allograft tight to ensure that it was the approximate length of the injured tendon, allowing 5 degrees of extra extension. 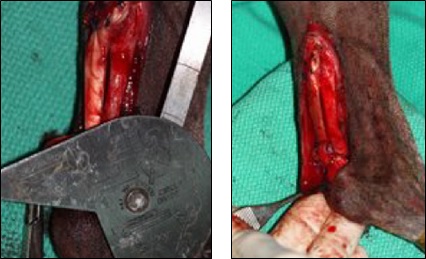 Once the allograft has been stretched tight and the proper angle has been achieved, the distal ends of the tendon are sutured to the remnants of the injured tendon tissue. 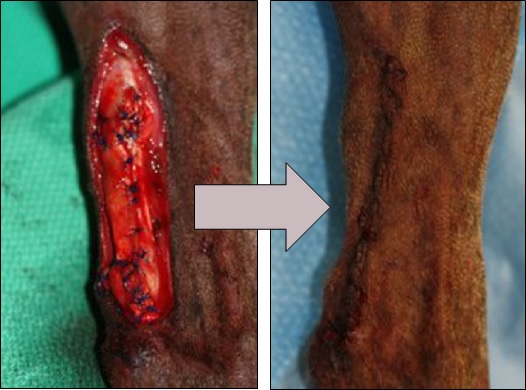 The tendon is then sutured to the remaining tendons in the surgical site. For this procedure, Dr. Brown used 3-0 nylon suture. While nylon is durable, as Devo healed, the knots began to protrude slightly from the skin and were eventually removed. Dr. Brown now recommends PDS with knots cut short and turned downward for these procedures.

Devo recovered very well from his surgical procedure. He spent six weeks in a padded splint that fully immobilized the tendon and hock joint. Some surgeons use an external fixator to ensure that the site remains immobilized as the tendon heals. However, Dr. Brown’s use of the splint serves a similar purpose that fit well with this active dog’s lifestyle. 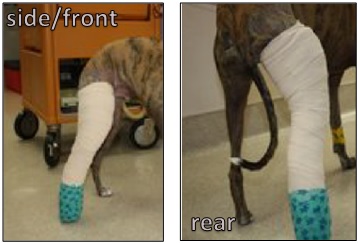 Devo’s splint from the front and rear. The splint allows him to ambulate (slowly and controlled) while still protecting the surgery site.

Patients with tendinopathies and tendon injuries are often given a poor prognosis or are subjected to months and months of rehabilitation and therapy. However, with an allograft transplant, these patients can fully recover and return to their normal activity level.

Devo is now five years from his initial surgery and, per Dr. Brown, has fully recovered and has a fully-functioning hock.

Have patients who can’t seem to keep their tendons tight? It’s time for a transplant!

What our customers are saying…